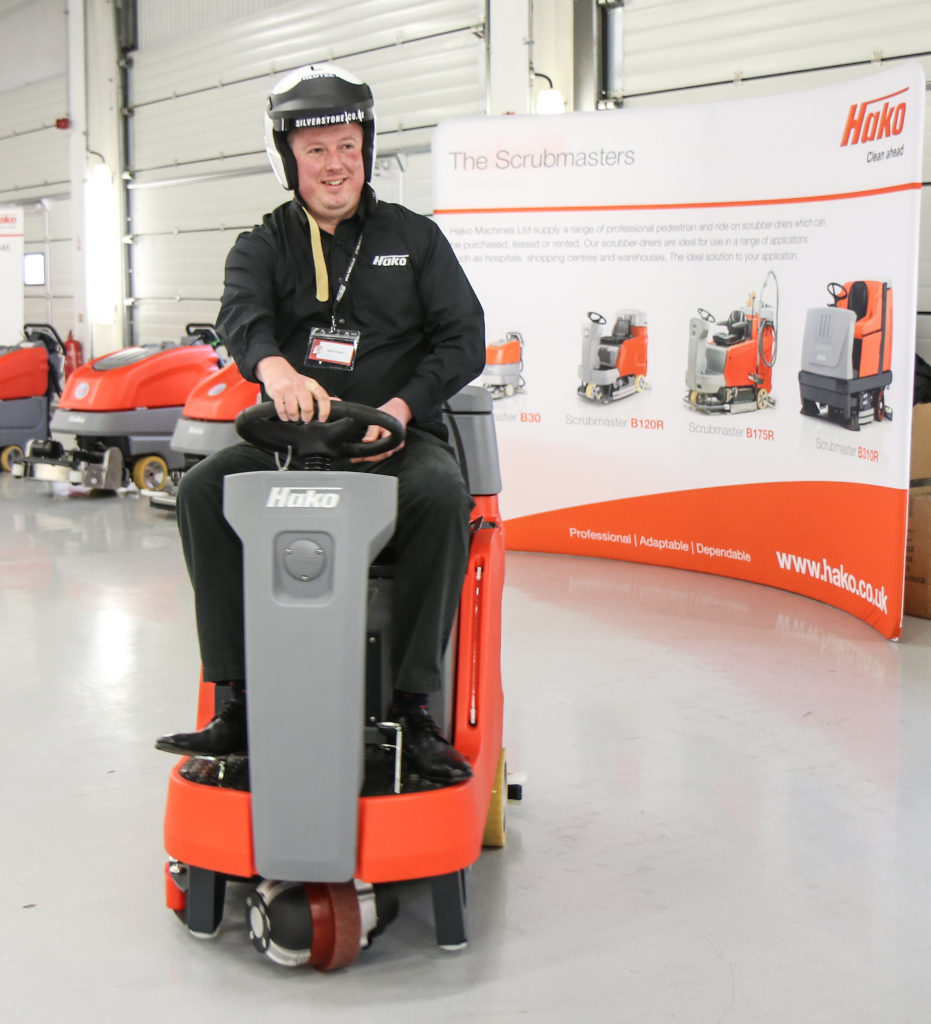 Happy Birthday Hako, what a day it was, celebrating 40 years in the UK. And what better way to celebrate than to have a party with top customers and suppliers.

Staged at Silverstone on March 14, Hako users from throughout the country joined in the festivities which included equipment demonstrations, new launches, high level seminars and some adrenaline fueled laps around the track. To cap it all off there was a birthday dinner for some of Hako’s VIP guests.

Among the 100 or so invited guests were representatives from Tesco, BT, The Trafford Centre, York University,  Briggs Equipment and DPD to name but a few.

“It really was a great day. We had some very high quality customers  join us – many of who came from far afield to support us and  we have had some lovely feedback,”

“The equipment demonstrations were particularly valuable. I think many customers had not realised the broad range of equipment we have. It was fantastic not only to be able to showcase but also to carry out live demonstrations.

“Another key element of the day was for our customers to meet the aftersales and demonstration teams. Forging great, transparent relationships with customers is at the core of our philosophy. A day like this helps build those relationships.

“The seminars proved very useful for our guests. I was particularly pleased to see how interested some of our customers were in the PMD session outlining the many finance options available.  I think the overall flexibility in hiring and renting Hako equipment came as a surprise to some.”

The next generation of floor cleaning…

One of the stars of the Silverstone event was the Roboscrub 20, heralded as the next generation of robotic floor care. The advanced A.I. system enables the robot to navigate complex, real world environments and designed to work safely and efficiently alongside employees and can still be used manually when required.

“Initial response from customers has been very positive,” said Frank Ulbricht, a member of Hako’s executive Board in Germany. “While such equipment is still in its early stages there is no doubting that this is the future as there is a shortage of workforce in the UK and throughout Europe and robotics will be very cost efficient.

“Hako UK has made some amazing strides forward over the past few years and Sylvie has a fantastic team around her. I am very happy to see so many customers here to join them in celebrating this milestone birthday.”

VIP’s at our Big Birthday Bash

The event filled day was followed by a gala dinner which proved to be a first class networking event for all those who attended.

“It has been a great day and a tremendous evening, we are delighted to have been a part of it”

What our customers said?

As for some of the Hako customers, Andy Wilson, a manager at international parcel delivery company DPD said. “Hako has an amazing range of equipment and it is Rolls Royce stuff. I would recommend it to anyone. But it’s not just about the equipment it is about the whole package. I would say that when it comes to after sales support Hako really is second to none. “This has been a great day and I am delighted to have been included. It has been extremely useful not only to have seen the full range of equipment. But also to have met so many of the Hako team as well.”

Chris Sockett, landscape and amenities manager at York University said it had been a “thoroughly enjoyable and well organised day”.

“It was great to see the product range you have in one place. And good to meet other members of the Hako team who are equally enthusiastic about what you have to offer.  The depth of knowledge and passion about the products was evident from speaking to the sales team and equally the technicians that came along too.
“The future sounds exciting and as current users of battery vehicles and tools it is safe to assume we will be keeping an eye on the new Citymasters when they are released.”